With the sad news of the doomed fate of flight MH370, I could not help but remember one of the most frightening experiences I’ve ever had flying.

I had spent 15 days vacationing in London in the interval between the Olympic and Paralympic Games of 2012. Everything went well, London had been sunny and warm for the most part of my stay. I had spent a lot of time sitting in green parks, visiting galleries and museums,  and walking up and down along the Thames riverside from Tate Modern to the Tower Bridge.  I had had such a great time that was even considering going back the following year.

But now I was ready to come home. It was a Friday evening and I was feeling relaxed and with my energies fully restored to resume work on Monday. My flight to São Paulo, Brazil, would leave from Paris. As you probably know, when you try to redeem the miles accumulated over months or even years of paid flights, when time has finally come for you to claim your reward, the airlines will give you the worst choices of flight plans they can possibly put together, short of making you take a route around the world to be able to get to the point on Earth you are aiming for.

So I needed to get to Paris first – a 90 min flight – before facing the uncomfortable and long journey back home in coach: although I fly all the time for work, the experience is far from enjoyable for me. 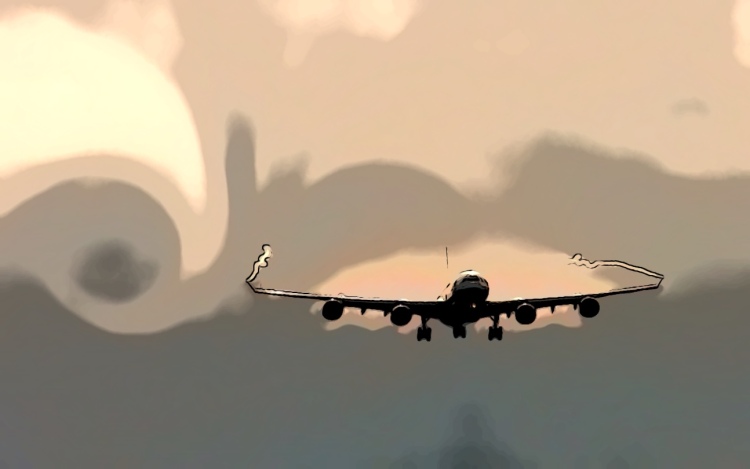 Armed with a bunch of newly-bought crossword puzzles, I took my preferred seat on the isle, next to a  good-looking young couple, who seemed to be still in love with each other. “They can’t have been together for long”, I thought, by the way they looked lovingly into each other’s eyes with a silly grin on their faces. They were both dressed like business people and I wondered about their luck being able to travel together for work. Or they might have just met on the plane and fallen in love. I know this can happen. Good for them. I was distracted by these fantasies as the plane took off.

As soon as the plane reached the right altitude, taking a horizontal position, I proceeded to take out my puzzles, pulled down the food tray in front of me, and started working furiously on solving the crossword problems. After a couple of minutes, I came across a tough one: 10 letters: synonym for commotion; unruliness; insubordination; rioting… I bit my pen in deep thought.

It was first felt as a sudden plunge into the void, which made some of the passengers cry out in fright. I was one of them. Then the plane stabilized for a moment, a couple of seconds maybe, and then a full-fledged turbulence broke out. The vessel shook like we were a cocktail being made by one of the cool bartenders in the Soho pub I had been to the night before. I was in terror. Stealing a glance at the couple sitting next to me, I noticed they were tense but totally silent. The smiles had been wiped off their faces but their hands remained held tight. I wondered if they would mind if I intermingled my cold and trembling fingers with theirs. With much effort, I refrained from trying this approach.

The plane seemed to steady and flew smoothly for a couple of minutes. I sighed. Peace did not last long, though. Soon the shaking and bouncing started again. Some middle-aged Spanish-speaking ladies, probably members of some tourist package holiday group, had seats a couple of rows ahead of me, to the right, and I could jealously see them laughing and screaming at the same time, while holding each others hands in support. Meanwhile, I was on my own, firmly gripping both arms of my seat and murmuring repeatedly DEAR GOD, DEAR GOD, DEAR GOD. I only noticed I was voicing these words out loud when I took another look at the couple – maybe to see if any of them would offer to hug me or hold my hand – only to find them staring at me with a despising look on their faces. I shut up and closed my eyes.

Another big mistake. The moment I shut my eyes, images of all the “plane crash” disaster movies I had ever seen came rushing back in waves, reminding me of the horrors of AIRPORT 1,2,3,4,5…, the beginning of the TV show LOST, and a memorable graphic crash scene from the 90s movie FEARLESS. The latter, however,  gave me some hope, as Jeff Bridges’s character survived the crash after all, and decided he was invincible from then on. I might be the lucky one this time.

The turbulence never let up. It lasted the whole flight. Getting worse and worse, till we were told that we should start landing procedures. Never had I experienced anything like that before. I was shaken to my core when we arrived in Paris, and almost missed my flight to Brazil, having totally forgotten to adjust my watch to account for the one-hour time difference between London and Paris. My lips felt dry and white.

My heart goes out to the passengers on board any doomed flight. I deeply sympathize with how they may have felt in the final moments, as I believe I’m a survivor.

On the peaceful 12-hour flight back home from Paris, I resumed the crossword puzzle I had abandoned when chaos took over the flight from London to Paris. The 10-letter word I was looking for was obviously TURBULENCE.