I was lucky to grow up in a house packed with books. Both my mother and father loved reading. However, a dear aunt who lived with us for the most part of our lives was the real family bookworm. She wouldn’t stop buying books. This is the kind of environment that fosters the taste for reading in a kid. We wanted to know what the fuss was all about. Why do these grown-ups keep their eyes glued to those pages when the rest of us are having such a great time in front of the television watching Lost in Space? I had to find out.

My Mom decided to buy a collection of juvenile books which had just come out. Each volume came out quarterly and was sold from newsstands. It was basically through this collection that I made the acquaintance of some of the  great storytellers of all time: Dickens, R. L. Stevenson, Jules Verne, Mark Twain, Victor Hugo and Jack London to name just a few. J. K Rowling was not among them, but I must confess I find Harry Potter’s The Prisoner of Azkaban a very sophisticated and clever book. The dementors, strange creatures that look after the magic prison featured in the story, are prone to inspire all kinds of psychological metaphors which can be disturbing even to adult readers.

In this post I’m going to list some of the books I loved when I read them as a child or a teenager and try to explain the power they exerted on my imagination, making me become an avid reader for life. 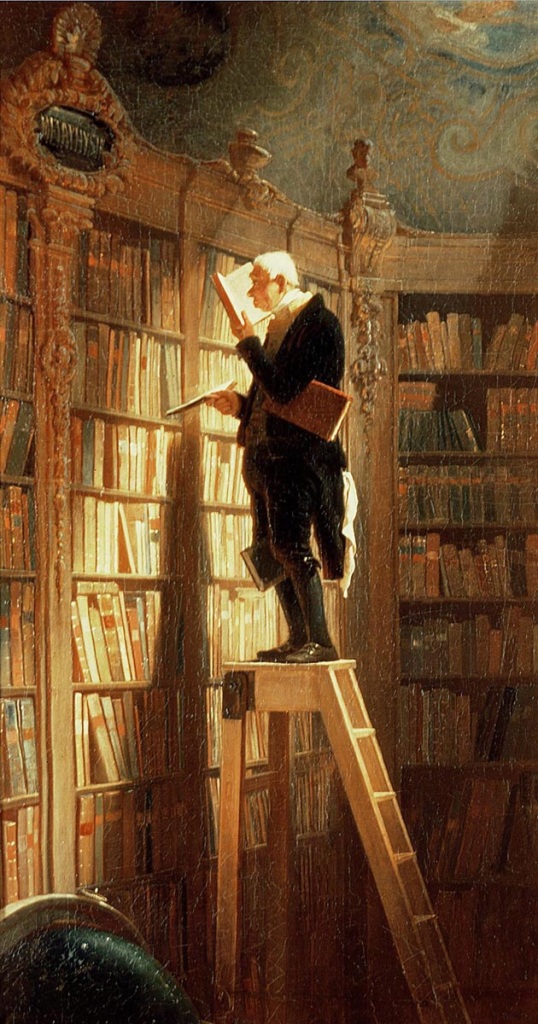 The Bookworm by Spitzweg, Carl 1850

1. Treasure Island by R. L. Stevenson: this was probably the first “real” book I’ve ever read (as opposed to the toy-books and comics I read before). It had a hard cover and it was thick by a 11-year-old’s standards. My brother and I read it around the same time and we couldn’t stop talking about Jim, the kid hero, who finds a map to a hidden treasure, after a mysterious captain dies at his parents’ inn by the sea. This is basically a coming-of-age tale, as Jim embarks on a perilous journey to find the treasure. Of course it has all the clichés  we associate with pirate tales today.  But I believe it must have been among the very first books to create and develop those same clichés in the first place.  Whenever my brother and I would go to desert beaches for a day or the weekend – they’re a lot more common on the northeastern coast of Brazil, where we lived,  than in the rest of the country – we relived in our imagination, as we ran up and down dunes and rocks,  Jim’s adventures and challenges. We were Jim ourselves.

2. The Adventures of  Tom Swayer by Mark Twain: who can forget Tom and Huck, best buddies, having fun, playing games and pranks in a small town by the Mississipi river in the early 1840s? Tom lived with a little bother, Sid, and a cousin, Mary, under the strict surveillance of Aunt Polly, who was always harassing the poor boy on matters of religion, cleanliness and good manners. Huck, on the other hand, was a boy of the streets, son of a drunk hobo, free to do whatever he pleased. Tom was the leader of the gang of the boys in the area, playing pirates and robbers, traveling to islands and exploring caves. The book is also about a boy’s first love and, although for most of us this was not so interesting, Twain made us care a lot about Becky, Tom’s sweetheart, by having them get lost in a maze-like cave, persecuted by a wanted criminal in the thrilling climax of the book. Unforgettable. This book is continued on a much more sophisticated work, The Adventures of Huckleberry Finn, considered Twain’s masterpiece. But I only got to read that a lot later in life.

3. The Call of the Wild by Jack London: the progressive inner journey of Buck – a domesticated dog kidnapped by an unscrupulous farmer employee, and sold to work as a sled dog in Alaska- into his wild self is beautiful and liberating. The story is boldly told from the point of view of the animal itself, so we get a whole new perspective. The story is so powerful that makes one wonder whether we ourselves should not follow a similar path in the search of our truest soul, shedding all the masks and disguises imposed by a false concept of civilization.

4. Oliver Twist by Charles Dickens: of course the possibility of losing my mother was the worst nightmare I had growing up. My father died in an accident when I was very young, so I grew up in constant fear that my Mom might leave me too. Reading Oliver Twist was a great cathartic way to put myself in the character’s shoes and deal with the horrible situations I feared the most, with the relief that, whenever I put the book down, all the horrors I had been through remained pure fantasy and my Mom would still be safely living with me. It was reassuring to realize I’d never had to beg for food as the poor hero after being served a meager meal in one of the most heart-wrenching passages of the book: “Please, sir, I want some more.”

5. Journey to the Center of the Earth by Jules Verne: if you read it today, it will feel a bit dated and definitely unbelievable. But at the time I first read it, I was fascinated by the trip to Iceland to reach the right volcano crater which would lead the characters down to the center of the planet. Some of the images branded forever in my brain by the powerful storytelling are, for example, the huge lake in the depths of the earth where we watch a fascinating fight between aquatic Cambrian monsters; the enormous caves jammed with stalagmites and  stalactites (I bet you don’t know the difference between them!)  the characters had to walk across on their way down, or the narrow halls and passageways along which they crawled down on their mission to get to the center of our planet.  However, it was hard to keep the suspence of disbelief during the passage at the end of the book, when the characters are implausibly ejected to the surface of the planet by riding a flimsy raft on rising boiling magma, traveling up a volcano channel. No way!

The books mentioned above are commonly associated with boys’ taste for challenge, danger, violence and adventure. I suspect, however, that girls might derive the same pleasure from them. What do you think? Please leave your comment and rate this post as you leave the page. Don’t forget to tell us about your favorite books too.