Batman, The Dark Knight, is one of the most iconic graphic novel characters of all time. Created by artist Bob Kane and writer Bill finger in 1939, Batman’s secret identity is Bruce Wayne, an American billionaire whose parents were murdered when he was only a boy. As a consequence, Bruce Wayne swore revenge on all the criminals of the corrupt-ridden Gotham, the fictitious city he lives in. 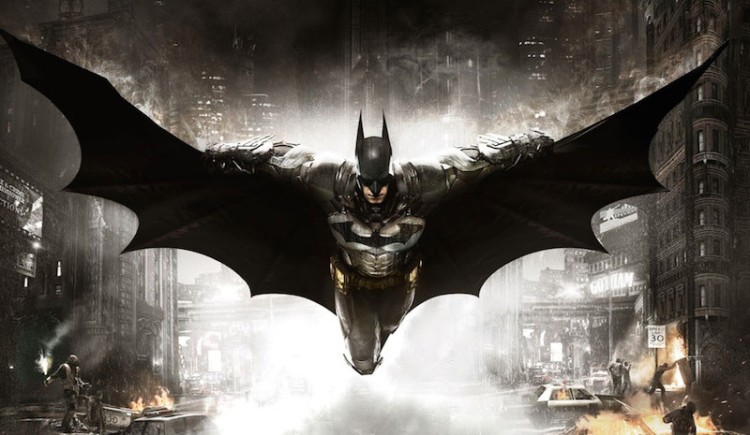 This world-famous DC Comics’s superhero has had his adventures turned into a popular TV show in the 1960s and numerous successful movies ever since. Bats, as he’s oftentimes called by some of his friends and foes, is up against a huge gallery of rogues – most of them mentally-disturbed individuals who develop idiosyncratic theme-related personas with corresponding crime styles.

We have selected six of Batman’s most dangerous enemies to discuss in this post. We cover their main personality traits, objectives and modus operandi, highlighting a couple of prominent quotes and naming famous actors who have portrayed them in movies or television.

Joker: one of the Cape Crusader’s scariest villains. A sadistic clown, with a disturbing grin, Joker was responsible for the murder of Jason Todd, Batman’s sidekick Robin, and for crippling Barbara Gordon, Batgirl, who became a paraplegic. In the movies, Joker has been played by great actors such as Heath Ledger, Jack Nicholson and Cesar Romero. Joaquin Phoenix, in the movie Joker, has given one of the most original and dazzling performances of the villain. One of Joker’s quotes: “In my dream, the world had suffered a terrible disaster. A black haze shut out the sun, and the darkness was alive with the moans and screams of wounded people. Suddenly, a small light glowed. A candle flickered into life, symbol of hope for millions. A single tiny candle, shining in the ugly dark. I laughed and blew it out.” 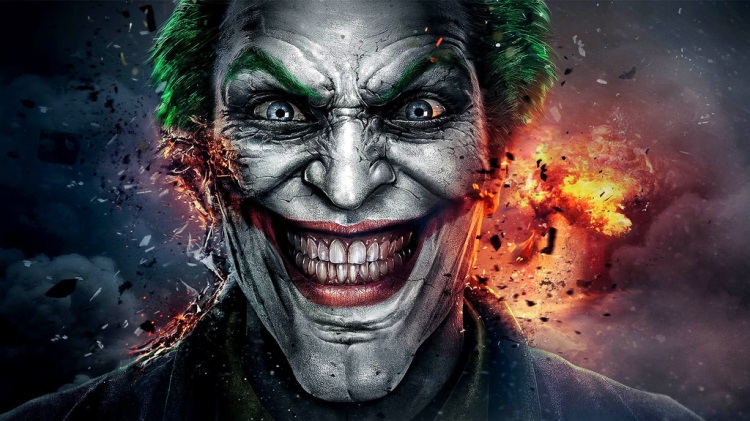 The Riddler: Edward Nigma wants, more than anything else, to prove his intellectual superiority over Batman. He challenges the Bat by throwing in riddles, puzzles and word games as clues to the crimes he’s either planning or is already executing. The Riddler has been played on the big screen by Jim Carrey (Batman Forever, 1995). Two of his riddles:

Q: What belongs to you, but is used by others? 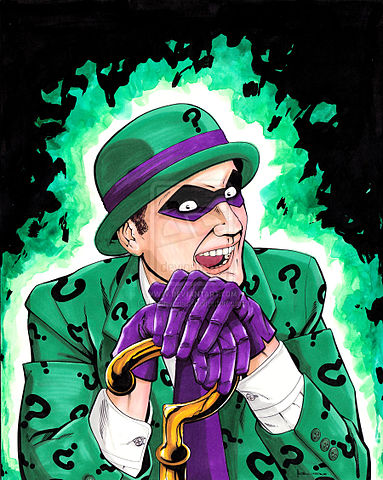 Two-Face: Harvey Dent was a close friend of Bruce Wayne’s and a former district attorney, defending Gotham City against its criminals. His life changed radically after being assaulted by Gotham City’s infamous mobster Sal Maroni, who cast acid into Dent’s face, disfiguring half of it. The incident heavily affected Harvey Dent’s mental health, causing him to develop an obsession with duality and the number two. Of course, this makes for a very interesting and sophisticated character, always torn between good and evil. Two-Face has the habit of flipping a one-dollar coin, with one of its sides suitably defaced, to make decisions about the conclusion of his crimes: eg. to kill a victim or not. Actor Aaron Eckhart offered a very convincing rendition of the rogue in the 2008 movie The Dark Knight. A quote by this fascinating villain: You have broken into our hideout. You have violated the sanctity of our lair. For this we should crush your bones into POWDER. However, you do pose a very interesting proposition: therefore, heads, we accept, and tails, we blow your damned head off! 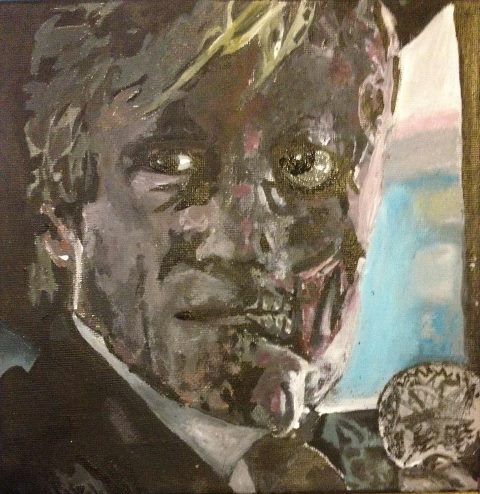 Poison-Ivy: Pamela Isley, a student of advanced botanical biochemistry, is an eco-terrorist. Her aim is to protect plants at all costs. She won’t hesitate to kill humans to protect nature, using all her knowledge of poisons and toxins to achieve her goals. Pamela has a love/hate relationship with Batman. Actress Uma Thurman portrayed the hot red-head in the 1997 movie Batman and Robin. A couple of quotes by the villain: 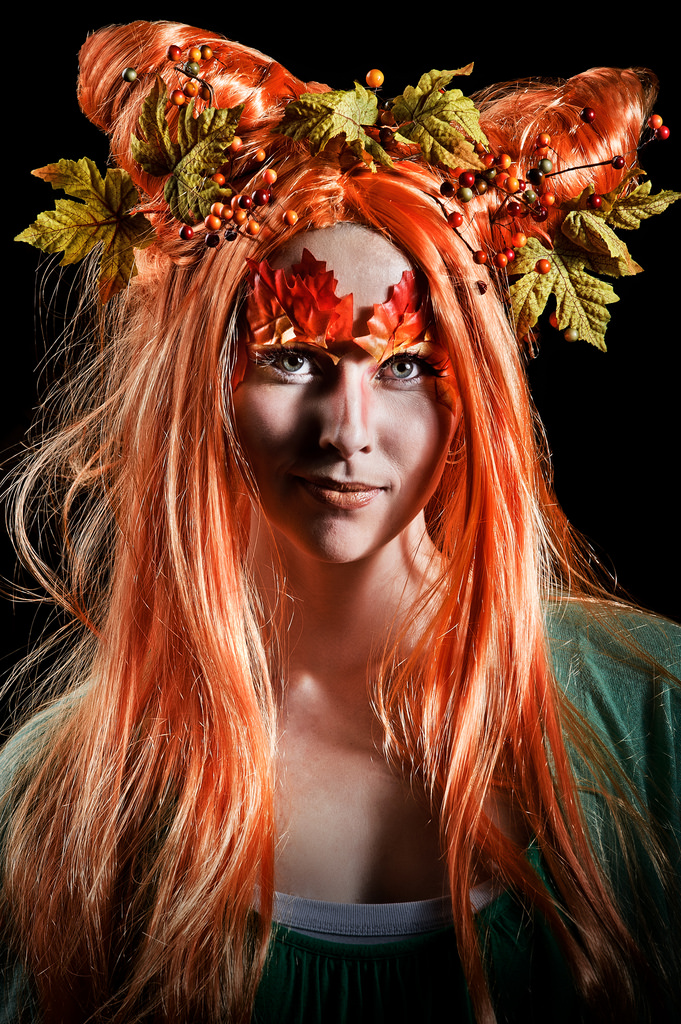 Catwoman: Selina Kyle is a lover of felines and their protector. She is sometimes portrayed as a burglar and jewel thief. In most stories, however, she is more of an antihero than a typical villain, as her love/hate relationship with Batman tends to blur the lines. Actress Michele Pfeiffer infused the role of Catwoman with a powerful dose of sensuality in the movie Batman Returns (1992). Julie Newmar (below) played the most popular and beloved Catwoman in seasons 1 and 2 of the 1960s TV show. A quote: Meow! 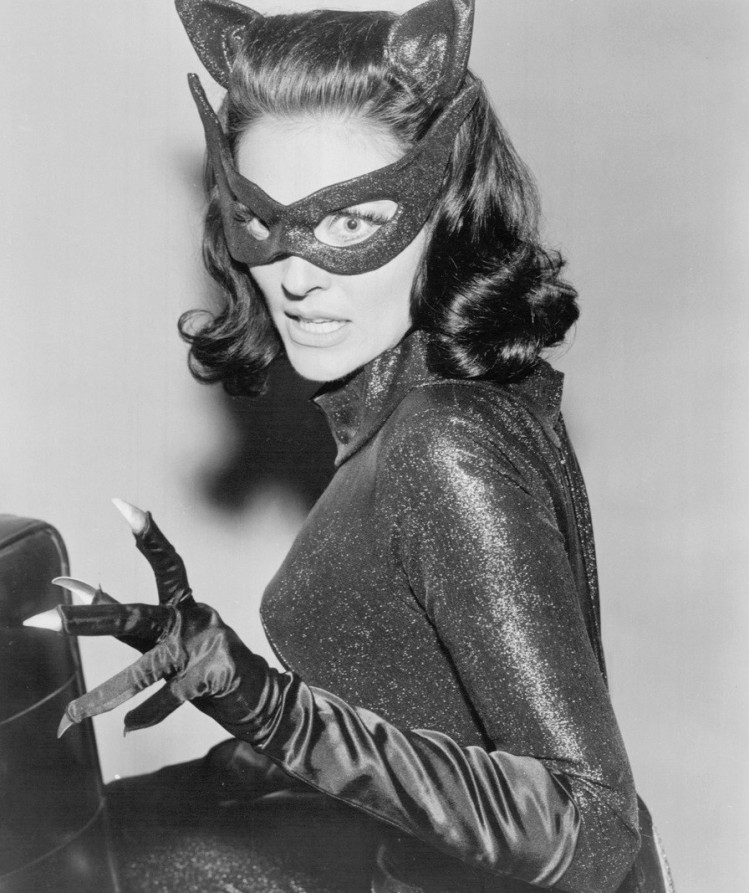 The Penguin: Oswald Cobblepot uses his nightclub, the Iceberg Lounge, as a front for his criminal activities. His ultimate goal is financial gain, as it suits a businessman. Always smartly dressed in a tuxedo and top hat, the Penguin makes use of his collection of umbrellas as deadly weapons. The character has been unforgettably portrayed by actor Burgess Meredith (below) in the iconic TV series of the 1960s. One of the man-bird’s quote: [to Catwoman] You’re Beauty and the Beast in one luscious Christmas gift pack. 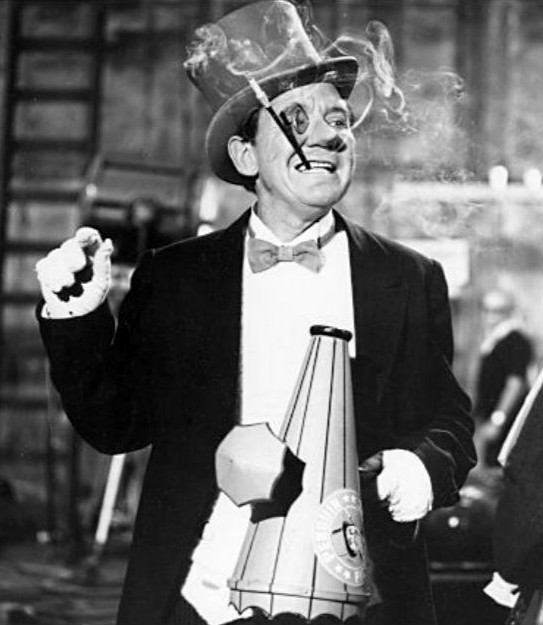 In the comments section below, please share with us your thoughts on Batman and his rogue gallery.