Writing in Portuguese makes it difficult for many Brazilian authors to gain worldwide recognition. Besides, a large portion of our literature focuses on issues such as the investigation of Brazilian identity, as well as explorations of local values and culture, which makes it, perhaps, less relevant for readers from other countries.

Things seem to be changing, however.  Acclaimed Brazilian writer Raduan Nassar, for example, was longlisted for the 2016 Booker Prize for A Cup of Rage,published in Brazil in 1978. 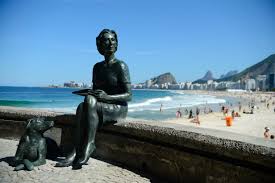 Clarice Lispector has always been an exception: a Brazilian writer known around the world. One of the reasons for this is that the plots and characters of her novels are far from traditional; Lispector’s characters tend to embark on nuanced interior journeys, exploring incredibly complex worlds. Nothing much happens in terms of action or the development of typical character arcs. Her books throw a unique light on different aspects of the human nature. If the stream of consciousness she often uses can make her prose somewhat hermetic and more challenging to read, it also allows her stories to travel internationally more easily.

However, even those who enjoy her work may not know the following facts about the famous author:

1. Clarice Lispector was said to look like Marlene Dietrich and write like Virginia Woolf. Her Eastern European looks were indeed striking and uncommon in Brazil. Her family had migrated to Brazil after the First World War, fleeing the pogroms against Jews in the region.

2. Her mother was raped in Ukraine during one of those pogroms and consequently contracted syphilis, which led to her untimely death a couple of decades later. It looks like Clarice was conceived as a possible attempt to cure the disease (a common superstition in those days claimed that giving birth to a child could cure the infection). Of course, this did not have the intended effect, and Clarice carried the burden of guilt for not having been able to save her mother for the rest of her life. Motherhood, or the lack thereof, is a recurring theme in her stories.

3. She was brought up in Recife, a city in the northeast of Brazil, where she went to one of the best public schools in the region, Ginásio Pernambucano. She was 14 when her family finally moved to Rio.

4. Clarice Lispector spent much of her life living in different countries and cities, as the wife of diplomat Maury Gurgel Valente. She lived in Naples, Bern, and Washington, among other places. Her natural intelligence, beauty, and cultivated manners, together with the experience of living in different parts of the world, made her of one of the most sophisticated women of her time.

5. Clarice had two sons: Pedro and Paulo. Pedro was so precocious that he learned the maid’s local dialect in Switzerland in a couple of days, frightening his parents. However, this was an early indicator of mental problems, and later on, he was diagnosed with schizophrenia.

6. Clarice was not a very political person, although she was aware of and hurt by the injustices and inequalities she observed in her adopted country. During the beginning of the hardest of the dictatorship years in Brazil, in the late 60s, she took part in demonstrations and spoke out against the military coup.

7. Close friends claim that Clarice was a lonely and difficult woman, especially after she left her husband in the late 50s and decided to live with her sons in Rio. She was addicted to sleeping pills, but when she couldn’t sleep she would call her friends to discuss her personal problems at all times of day or night.

8. Clarice survived a fire started when she fell asleep with a lit cigarette in her hand. At this time she lived in an apartment in Leme, a stretch of beach close to the fashionable Copacabana of the 1960s. The third-degree burns left her badly scarred for life, especially her right hand – which she used for writing!

9. Clarice had a totally modern and original way of writing. Themes related to motherhood, as well as reflections on how she missed her own mother, figured largely in her work. Her ideas were heavily influenced by the philosopher Spinoza and the language she used made her an extraordinarily creative and original writer.

10. She wrote nine books, a play, a number of short stories, and some children’s literature. She was also a journalist and had columns in important Brazilian newspapers, where she usually wrote crônicas (a typically Brazilian genre, in which authors narrate facts about simple daily experiences in interesting and original ways) or dispensed advice for women readers, under her own name or pen names. She died of ovarian cancer in 1977 at age 57.

Have you ever read any of the works of the brilliant writer? Share your opinions with us.