Looking for the perfect book to read on Father’s Day? The Shining by Stephen King is a classic: one of the scariest books ever written. One reason for its popularity is the novel was turned into a celebrated movie directed by Stanley Kubrick, starring Jack Nicholson and Shelley Duval in the main roles, back in the 1980s.

Rumor has it that King himself was not entirely happy with the movie adaptation. If you read the book, you will probably understand why. Although the movie is heavily inspired by the book, it takes a lot of detours from the original plot and skips important themes that play an essential subtext.

In broad strokes, the novel tells the story of Jack Torrance, a recovering alcoholic with a short temper, who – unable to find a job anywhere else, after beating up a student at the school he used to work as a writing teacher – is hired, with the help of a friend, as the caretaker of the sinister Overlook hotel for the winter months, taking his young wife, Wendy, and their 5-year-old son, Danny, with him.

The hotel is completely empty and isolated. To spice things up, Danny has the gift of precognition, popularly known, among the initiated, as the shining: he can read people’s thoughts, foresee the future, and have glimpses of violent incidents that took place a long time ago. Weird things start happening at the hotel. The family, especially the father and the son, are haunted by ghosts and unusual experiences.

Among the strange ocurrences that contribute to its sense of horror, the novel depicts a topiary – bushes and trees trimmed in the form of a rabbit, two lions and a dog – that seems to come to life occasionally; a dead woman who rises from a bathtub in room 217 (to this day, guests in many real hotels are said to turn down the offer to occupy the room with this number because of the novel); images of a mob murder that happened years before materialize in vivid form in front of the kid; in addition, mufffled sounds of a mask ball from the past are heard continually at night. 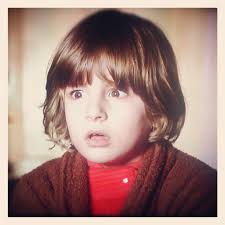 Could all this be a metaphor for a darker link between father and son? The symptoms of something terrible lurking inside the boy and ready to blossom?

As the months go by and the winter becomes harsher, the claustrophobic atmosphere of the hotel inevitably starts to unhinge Jack Torrance, whose madness slowly sets in. He becomes a deadly menace to his own family.

(Watch the clip of one of the best scenes of the movie below. Warning: strong language is used)

Stephen King is not only a bestselling and prolific author, but he’s also really talented. His books are not just airport thrillers made out of a schematic formula meant to provide a couple of hours  of entertainement before being thrown out in the trash can at the end of your flight. The Shining, for example, can be read on at least two different levels. On a simpler, more straightforward level, we have the chilling mystery tale of a family stranded by heavy snow and lack of telecommunications, living alone in a more than 50-year-old luxurious hotel up in the mountains of Colorado.

An even more disturbing way of interpreting The Shining, however, is to read it as a vigorous metaphor for alcoholism, its genetic origins and terrible consequences: the story would consist of hyperbolic images translating the symptoms of that powerful disease that can be handed down from father to son to grandson, causing extreme anxiety, cravings, hallucinations, madness, violence, and, ultimately, death.

As backstory, the reader learns that Jack’s own father was an alcoholic. He would come home from his job as a nurse, smelling of booze and abusing his wife and kids. Despite being very fond of his father, Jack’s love wears out, as he witnesses a vicious beating his Dad administers to his Mom, for no reason at all.

Danny and Jack, for their turn, are quite close too. As a matter of fact, the bond between father and son is so strong that Wendy sometimes feels left out of their peculiar masculine world, and, as a result, even gets a bit jealous.

In an alternative interpretation of the novel, therefore, the closeness between father and son, Jack’s increasing madness at the hotel and Danny’s precognition gift can be easily understood as the addictive genetic inheritance handed down to the next generation, the beginning of what will become for Danny a full-blown disease in the future.

Steven King himself was an alcoholic at the time he wrote the novel and the theme in The Shining reflects his own worries and unhappiness about the problem. Writing, after all, has always been a potent way of purging one’s own demons.

Whatever layer of the story you choose, rest assured it will scare the living daylights out of you, which is why the book is such a great thriller in all respects.The book sustains a very oppressive atmosphere, making it rather dark. Perhaps you should put off the experience until Halloween rather than reading it now, on Father’s Day! The tension in the story grows progressively unbearable, culminating in a gruesome climactic sequence. Not to be missed.